Skip to content
HomeMaking the Right but Unpopular Decisions: You’re Not Alone 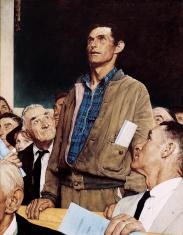 Have you ever found yourself getting resistance from people just because you follow Hashem’s word?  You know, because you actually choose to live a life believing that Torah, the word of YHVH, is actually an established standard.  A lot of the reason behind this resistance is because YHVH’s word confronts hot topics like sexuality (Exodus 20:14, Leviticus 18:22, Job 31:1), appearance (Deuteronomy 22:5, Leviticus 19:28, Ezra 10:11) and conduct (Leviticus 19:12, 16-18, Proverbs 23:20-21). It’s surprising, but I have even meet “religious” folks that figure the unpopular precepts of YHVH are out of date, and anyone who chooses to believe in them are just narrow minded. The one thing that we all agree on is that if Hashem did not hand down all these laws (1) it would make it so much easier to just “go with the flow”, but that’s not what we are called to do (Leviticus 19:2, 20:7, 26)

Our confrontations with those that live by their own rules are not so unique.  They are reminiscent of Numbers 16 where Korach (Korah) and 250 other Israelites rebelled against Aaron and Moses. These men tried to take over the leadership of Hashem’s chosen people. They felt they had a better understanding of Hashem’s will for the people than Moses did, Numbers 16:3, 12-14. This move showed a lot of “Chutzpah” and begs the question “who was Korach and his posse?”  Well one thing is for sure, Korach certainly wasn’t a “no name” face in the crowd.  If we look in Exodus 6:18, 21 and later on in 1 Chronicles 6:2, 18, 33-38, 23:12 we see that Korach was the great-grandson of Levi (the patriarch).  Because of this, Korach had status and worked in the tabernacle (Numbers 16:8-9).  Also, he was related to Moses and Aaron, he was their cousin (2).  As for the 250 that supported Korach and the rebellion, they were not an unruly rabble.  They were “leaders of the community… key members of the council (and)… men of reputation”, (Numbers 16:2) pretty impressive resumes, huh.

So this mob of pedigrees decided to take over at a time that all the hard work was done.  “Think about it”… At the beginning of Exodus, Moses was burden with the role of leading the Israelites out of enslavement; he dealt with Pharaoh and the plagues (Exodus 7:14-12:36 , Deuteronomy 11:3), the crossing the Sea of Reeds (Exodus 14:26-29, Deuteronomy 11:4), the trials and tribulations of the desert, and of course the handing down of YHVH’s law (Exodus 20:1-17, 34:28, Deuteronomy 5:4-21).  Yet, now this band of entitled ruffians wanted to take charge.  As we analyze their motives we find the problem the 250 had was perception.  They thought they were going up against Moses’ leadership but what they were really going up against was Hashem’s authority, (Numbers 16:11, 26:9). Reading on we discover the fate of the 250.  It was a fiery slaying at the hand of Hashem for the disrespect of HIS law, not Moses’.  So did Moses smugly say “well, they got what they deserved”? No, he fought for their lives up to the last minute (Numbers 16:20-22) as was his nature.  We should remember this aspect of Moses and his righteousness when we come up against those that try to combat our beliefs.

The Korach Rebellion is similar to when we discuss YHVH’s laws with others. We are sometimes criticized much in the same way Korach’s gang attacked Moses, but it is really Hashem’s law they are up against. This is why we should not argue, if we are not being heard we need to show discernment (Proverbs 10:23, 11:12, 14:33) and respectfully disengage.  But if we are in a mature discussion we need to remember we are there to represent Hashem’s word not our opinion. Once our audience see our lack of objectivity and sense us making it personal, we become no better than Korach.

Going back about 20 years from the rebellion (3), the Israelites did not want to have a direct relationship with Hashem, they wanted a “go-between” and they made that conduit Moses, (Exodus 20:16 Deuteronomy 5:5, 18:16 )  Although this appears to be mostly motivated by fear, it does make it convenient for people when they want to challenge what’s being said; better to challenge a man than Elohim. Maybe that’s why many people of faith even today feel more comfortable with following a religion with its leaders and books beyond Torah. Establishing a relationship with the Maker of the Universe by just going to His word is intimidating but it has the highest dividends.  Korach confused Hashem with religion, we do not need any new religions, we need to remove the obstacles between us and Hashem.