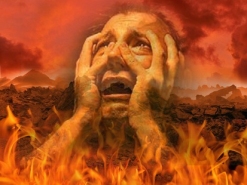 If we grabbed a bunch of strangers off the street and asked them “What do you know about Hell?” we would probably get some very different stories.  These stories would, however, share at least some similarities, like Hell is an underworld, it’s fiery, it’s eternal and even that it’s a punishment for the wicked. The Gallup Poll tells us that 70%1  of Americans believe in Hell.  If we asked these 70% where they get their ideas for Hell, many might say the bible. That being the answer, they would only be half right; because, only half of the Christian bible talks about Hell, and that half is the New Testament. The Torah/Tanakh (Old Testament), is silent on this topic.  So where did the New Testament form its views of Hell?  You might be surprised to know. 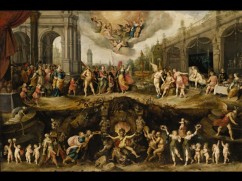 In the Tanakh (Old Testament), the place we go after our physical death is Sheol.  This is an underworld and probably inspires the Christian idea of Hell.  Actually, in many Christian bible translations, like the KJV, Hell is a substitute for Sheol.  This is a problem because there is a distinct difference between the Tanakh’s Sheol and the Christian Hell. In the Christian version of Hell only those damned for sins are sent (Mark 9:43-44, Luke 16:22-24, Jude 1:7), to their fiery damnation, whereas; Sheol is the destination for all souls, both good (Psalm 16:10, 30:4, Isaiah 38:10) and bad (Numbers 16:33, Job 24:19, Psalm 9:17).  There’s a parable in the NT, titled “The Rich Man and Lazarus” and there they first introduce their audience to the conceptual idea of a Heaven and Hell contrast.  This parable is staged in the underworld of the dead, a “Christian Shoal” if you will, where only the evil go (Luke 16:22-23).  About this story, there has been a long standing argument in the Christian community about whether this was just a parable or an actual event spoken of by the Christian messiah.  After some research, it appears that this story was actually a blended tail taken from both Jewish and Egyptian folklore2 developed many years before “Jesus of Nazareth” allegedly told that. There’s also a Muslim version of this story, where Allah says to one of his Angel, “Tell the non-believers, I sent Messengers to you on earth. Why didn’t you believe in what they said? So now you will remain in Hell forever.”3 . Sadly, it took the contribution of several cultures to take this simple word “shoal” from its true meaning, to turn it into something that it’s not (an entire demonic world). 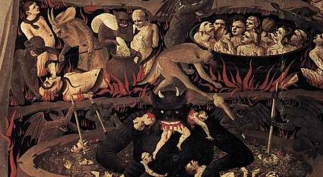 In contrast and absolutely opposite of what the Tanakh teaches us, most ancient societies, such as the Egyptians, the Babylonians, the Greeks and the Romans developed a concept of punishment for the wicked when they died, as a way to provoke them to be good when they’re alive. All these beliefs are close to the traditional view of endless punishment that the New Testament pushes. When trying to find a beginning for these concepts, we find that if Hell has a father, it is not Satan, but rather the Greek writer, Plato.  For it was he, who originally penned Hell as “a place from which these wicked sinners will never leave” 4.   Interestingly, in Islam, Hell is reserved only for the non-believer3.  That being said, Christianity conveniently counts non-believers as sinners (2 Thessalonians 1:8). I almost wonder if their eternal punishment of the wicked is more about their need to feel justice was served to those whose evil abounded.The Tanakh though, takes a very different approach.  It appears that instead of the wicked being punished, they are destroyed, perished and/or blotted out (Deuteronomy 8:19, Psalm 9:6, 37:20, 68:3,145:20, Proverbs 10:7, Malachi 4:3). 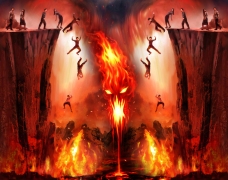 The Hellenistic Jews came up with a similar idea of a burning Hell from the concept of “Gehenna” This was a valley near Jerusalem. It means “the Valley of the sons of Hinnom.” This location and event was one of Judaism’s greatest abandonments of faith.  In Gehenna, about the seventh century BCE, some Jews passed their children through the fires in sacrifice to a foreign god (2 Kings 16:3; 2 Chronicles 33:6; Jeremiah 32:35). After these wicked proceedings ended, the location became regarded as ritually unclean (2 Kings 23:10), and they defiled it all the more by casting the bodies of criminals into its smoldering heaps 5.  Thus; this event is what helped bore the idea of Hell being an actual “place” that people go to and burn. As well; many people associate moral punishment from Hashem (Genesis 19:24, Psalms 11:6, Ezekiel 13:13, 38:22), as an eternal punishment, when in truth, there’s a big difference between a moral punishment versus an eternal punishment.

These ideas of a fiery Hell to burn in for eternity isn’t just from the Christians and the Hellenistic Jews, as the Muslims have capitalized off of it in their religion also.  Islam says that the least of their seven punishments of Hell is to walk around in fiery shoes.  This makes the non-believer feel like he is suffering the worst of the punishments. 3

Centuries before the authors of the New Testament started to pen the Christian concepts of the afterlife, Hellenism permeated the Jewish nation. With this infusion of the Greeks ideas and philosophies into the Hebrew culture, we see Greek concepts imbedded in the New Testament. Adding to this, at the end of the 2nd century CE we also see Christianity blending Greek philosophy with their own theology 6.  I’ve heard some retort that this isn’t possible because the Gospels were written in the 1st Century CE; but the problem with this, is that we have no physical evidence of this, but what we do have evidence of, is that the oldest surviving manuscripts are newer than 200 CE.  In short, the Tanakh does not speak of a Christian Hell; but the Greek culture does.  If you read Ecclesiastes 9:2-6, you will find that the afterlife spoken of in the Tanakh is not the same place that New Testament messiah and his apostles spoke of.  It is possible that Christianity, with its exclusiveness and it’s threat of Hell, were just trying to create an environment conducive for proselytizing/evangelizing.

Now that we know where we “Don’t” go when we die, let’s dig into HaShem written word and see what He says about it all.
Next week we’ll find our answers to these questions in the the article:
“Sheol; Life After Death”
See you then.

(2) Richard Bauckham, The fate of the dead: studies on the Jewish and Christian apocalypses (Netherlands: Brill, 1998), p. 101

(5) Is hell literally a place of fire and brimstone? GotQuestions.org

(6) The Origin of Hell-Fire in Christian Teaching, Truth According to Scripture