Skip to content
HomeThe Parents of Christianity, An Odd Couple 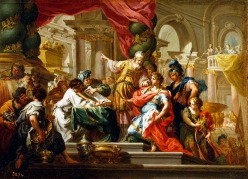 When we open up a Christian bible there is an unaccountable span of time. This period is about 400 years.  The gap is between the last pages of the book of Malachi and the New Testament.  I think we can all admit that four centuries is a pretty good chunk of time.  For example, in our own history, less than 400 years ago the Pilgrims landed on Plymouth Rock 1. Amazing when you think about it, America started with 100 individuals seeking religious freedom and became the world’s Superpower2  in under 400 years.  So, being analytical, we will use an evidenced based History to fill in the gap to gain a better understanding as to what changed from the final page of Malachi to the first pages of the Gospel3.

After Malachi was written and before the Christian messiah was born, early in the third century BCE, Alexander the Great conquered most of the known world.  In doing so, he ushered in Hellenism into these occupied territories, which included Israel4.  So, what is Hellenism? It is the Greek mindset, a mixture of their thoughts, science, art and culture5. At first the Jews welcomed these concepts but with each new generation of Greek leadership Hellenism was increasingly forced on the Jewish people.  Although some of the Jews resisted as we can see with The Maccabean Revolt6.  This was not always the case, sadly a large population of Jews embraced this new Hellenistic persona.  Thus was coined the name “Hellenistic Jews”. Disappointingly, even Jewish High Priests took part in these identity makeovers7. 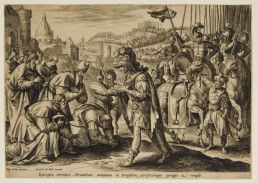 So, why can’t these two cultures become blended? Simple, it is not like combining colors to form a new hue, it’s more like mixing oil and water, they just don’t mix.  This is because Hellenism and Judaism are diametrically opposed cultures and cannot mix.  In fact, trying to mix them would cancel out one or the other. When we study it out, we find that Christianity was born from these societies; a Jewish faith combined with a Greek Philosophy but this makes more of a mutation than a high-bred.  Let’s discus the differences, and in doing so we will see the flaws that surface in the Christian religion:

The Greeks worshipped gods, which makes them polytheist.  Whereas the Jews recognize only one God, YHVH, this makes them monotheist.  Although Christians call themselves monotheist like their Jewish forefathers they are really polytheist.  For example, the Trinity (Matthew 28:19, 2 Corinthians 13:14, 1 John 5:7-8).  One of the reasons why the trinity fails when comparing it to the Tanakh is the Holy Spirit or “ruach”. In the Tanakh (Old Testament), the ruach is listed numerous times9 but it is never worshipped, yet the New Testament gives it an equal placing with Hashem (Matthew 12:31-32, Luke 12:10, 2 Corinthians 13:14).  Also, although Christians insist that their messiah and YHVH are one the New Testament clearly states that they are separate; John 8: 15-18, Acts 7:55, 56, Colossians 3:1, Revelations 5:7.  Again Christians are insistent on believing in one God because they know this is the right answer (Exodus 20:3, Deuteronomy 6:4, Isaiah 43:11) , but ask them to deny the holy ghost and their messiah and only accept the one God YHVH and see where they stand. 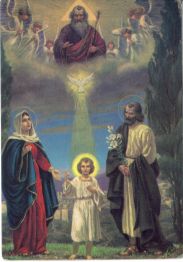 Adding to these three is the forth Christin god, Satan. I know that sounds weird, but it’s true. The New Testament gives Satan equal footing with their other three gods.  Look at 2 Corinthians 4:4 and 1 John 5:19, it claims that Satan is the god of this world. This is in contrast with the Tanakh (Old Testament) where Adonai is responsible for all things, good and evil, (Isaiah 45:7, Amos 3:6, Ecclesiastes 7:13-14).  As we can see in Job, Satan is not a god but is relegated to working for God (Job 1:12, 2:4-7).

We know that we cannot see YHVH, (Exodus 33:20), however in the Greek culture they can see their gods as depicted by their statues such as Zeus and Hercules (Heracles).  Christianity, like the Jews, lays claim that they cannot see God (John 1:18, 1 Timothy 6:16, 1 John 4:12), they also say that God and their messiah are one.  As we know Jesus of Nazareth is physical and can be seen.  When you truly examine it, it appears the Christian messiah more resembles a human deity than the Creator of the Universe. Research it, further Jesus’  life strongly resembles many of the Greek gods such as Odysseus, Dionysus and Hercules.

In the Hellenistic understanding everything has an opposing concept.  This is called dualism.  Another way of saying this is everything has an evil and good contrast.  Here are some dualism examples of good versus evil; white vs. black, day vs. night, tame vs. wild… etc.  The problem with “across the board” dualism is that it can cause one to villanize anything you may not agree with or understand 10. In dualism theology we are more apt to externalize problems (it’s Satan or the world) verses internalizing solutions ( I am responsible).

Thus in Christianity we become victims of Adam eating the forbidden fruit.  In sermons we hear this action introduced an evil strain into our DNA.  So what’s the antidote? As is taught, Jesus of Nazareth is, so if we accept him we will become saved.  Confirming this Ephesians 6:12 tells us “we do not wrestle against flesh and blood, but against the rulers, against the authorities, against the cosmic powers over this present darkness, against the spiritual forces of evil in the heavenly places”. In short, it is not our fault we are born into a broken world. The New Testament again and again beats home the message if we accept the messiah, thus turning away from Satan, we are saved, (Acts 26:18, Ephesians 2:2, Colossians 1:13). In the dualism of Christianity God is not the master of everything, He has an evil twin brother named Satan that competes for our souls thus polarizing the world. This is also the form of dualism taught by the Hellenistic period Greek Philosophers.

Whereas with Christianity sin is seen as a disease that needs a remedy, the Tanakh teaches that sin is not a virus but a challenge that needs to be mastered.  If you recall, HaShem told an angry Cain “…if you don’t do what is good, sin is crouching at the door — it wants you, but you can rule over it.”” (Genesis 4:7). Hmm, HaShem didn’t tell Cain He was going to send him a savior, or to surrender his sin to Him, He told Cain that he was responsible for his own actions so deal with it.  It sounds blunt, but remember the Master didn’t set Cain, or us, up for failure, He gave us an owner’s manual, His word. 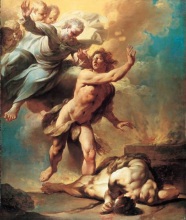 As we see in Genesis 6:5 HaShem acknowledges the evil in the world. He then floods the world, many of us assume that He was destroying the evil but after the flood subsides HaShem acknowledges evil within man still exists (Genesis 8:21). So there is no mention of a savior that will eliminate evil.  Evil is not an external influence that can be eliminated, it’s internal to man, a simple byproduct of free will (yetzer hara 11).  The challenges is how do we handle it in our lives, and the battle of mastering over sin becomes our maturing process.

We need to remember that the Greeks believed in syncretism 12.  Syncretism is the combining of religions, i.e. “you can keep your God but you will add our gods”.  We have an example of this in the New Testament. The Christian evangelist Paul did this in Athens, (Acts 17:22-31).  The process of syncretism is prevalent throughout Christianity. Let’s take the case of the Holidays commanded to be done in Leviticus 23. In Christianity, Passover is replaced by Easter, the other six are not performed and the pagan holiday of Christmas is added, this is syncretism at its finest.  But it doesn’t stop here, in Christianity there is the dominance of a human deity over God, the changing of the Sabbath, and the minimizing of the Torah (Ephesians 2:15, Hebrews 8:13, Galatians 3:10), the list goes on from here. In short the fingerprints of Hellenism are all over Christianity, what causes the contrast in Christianity are all the books before Matthew. 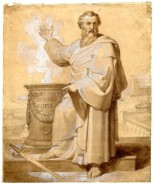 Paul and the unknown god

(2) By Jonathan Adelman, (November 24, 2013), Why the U.S. Remains the World’s Unchallenged Superpower, Forbes

(3) What year was Jesus Christ born? When was Jesus born? GotQuestions.Org

(4) By Rabbi Ken Spiro, Alexander the Great, the Jews, and Hellenism