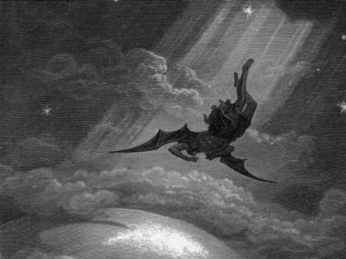 Most of us have heard the story about Lucifer (or Satan), being cast out of heaven.  As the story goes, he was cast down to earth from heaven and took a third of the angels with him.  For those of us who left the church to live a more Tanakh centric life, this story still resonates with us, and many of us ask, “How much of it is true?”. As I remember, there were verses in both the Christian New and Old Testament that back up the story of Lucifer and his troupe being thrown out of heaven.  Let us find out which parts of this story are true and which are false in the Tanakh, God’s word.

This story is actually in the Tanakh, in Isaiah:

Christian commentary says that the “morning star” is Satan.

Actually, “morning star” is called “O Lucifer” in less than half of the Christian Bibles:

Isaiah 14:12 How art thou fallen from heaven, *O Lucifer, son of the morning! how art thou cut down to the ground, which didst weaken the nations! (KJV)

This verse on its own doesn’t imply Satan.  Yet, when you add it to the Christian Testament (NT), it gives the verse new possibilities.  If we look into the NT it defines what a falling star is – the Christian messiah says, “I saw Satan fall like lightning from heaven” (Luke 10:18), and in the book of the Revelation, Satan is seen as “a star that had fallen from the sky to the earth” (Revelation 9:1).  Attaching these Christian verses, it really feels like Isaiah is talking about Satan.

Yet, what is confounding is that when we read further in Revelations, we see the Christian messiah is being referred to as a “morning star” in Revelation 22:16.

Actually in Revelation 22:16 Christians connect their messiah with King David because David was considered a shooting star.  This idea is found in Numbers 24:17 were it implies the foreshadowing of David as a future warrior:

“I see it, but not now; I behold it, but not soon. A star has gone forth from Jacob, and a staff will arise from Israel which will crush the princes of *Moab and uproot all the sons of Seth”

*King David would be the one to crush (defeat) the Moabites in II Samuel 8:2 about 1,400 years later.

The Jewish say that the “morning star” is Venus, which gives light as the morning star.  Venus starts out brightly but then fades away.  The analogy here can be applied to the Babylonian ruler1. 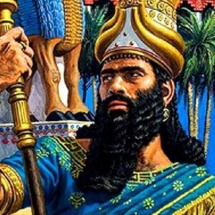 If we read before this verse in Isaiah 14:1-4 we see that it is talking about how Adonai will allow the Jewish people to defeat Babylon.  The demise referred to in Isaiah 14:12-15 is not Satan being thrown from heaven but Nebuchadnezzar being thrown out of power.

Actually, Isaiah chapters 13 through 22 are Isaiah’s Prophesies against the Nations and have nothing to do with the Christian prince of darkness.  There is ample evidence that much of Isaiah was composed during the Babylonian captivity2.  Therefore, it makes sense that this passage is really about King Nebuchadnezzar being dethroned.

As many of us know, due to Israel’s rebellion, God allowed Babylon to capture them.  In Jeremiah 28:14 God states “‘I have put a yoke of iron on the necks of all these nations, so that they can serve N’vukhadnetzar (Nebuchadnezzar) king of Bavel (Babylon)’”.  Isaiah’s prophecies about Babylon dying out “like a morning star” came to fruition when the Babylonian captivity ended as stated in Ezra 2:1.

As such, the Tanakh really never states that Satan was thrown out of heaven.  It is talking about the fall of Babylon’s ruler King Nebuchadnezzar.  So what about the part where a third of the angels leave heaven? 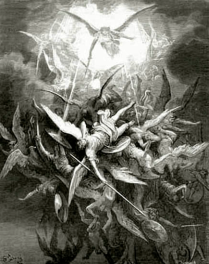 This can be found in Revelation 12:4:

“Its tail swept a third of the stars out of the sky and flung them to the earth. The dragon stood in front of the woman who was about to give birth, so that it might devour her child the moment he was born.”

As we know much of Revelations was plagiarized from the Book of Daniel.  This segment is no different, and it was taken from Daniel 8:10.  Daniel is rich in symbolism but the stars here do not resemble anything demonic.  In fact, quite the opposite – they are symbolic of Israel (Genesis 15:5, 22:17, 26:4).

The only other place where it talks about angels being cast of heaven is the Book of Jubilee.  The Book of Jubilee never made it into the canonization of the Tanakh because of doubt with regards to its authorship and authenticity3.  It can, however, be found in the Apocrypha.

As we see, when we are willing to cross reference verses in the Tanakh the truth becomes evident.  There have been sermons, books, and doctrines based off an interpretation that could have been disproven if whoever made these assumptions was willing to read before and after this single passage – amazing!

This leaves us with the question “Who is Satan to us,”  we will answer that in next week’s article.