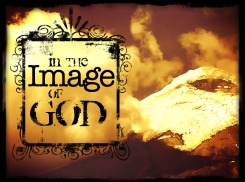 “God created mankind in his own image”, it almost sounds presumptuous; yet Genesis 1:26-27 tells us it’s true.  Some faiths take this way out of proportion. For example, the New Age Religion considers themselves to be gods1. It’s quite possible that this might have been the line Adam and Eve crossed, you know, wanting to be God (Genesis 3:5). Since we know how eating the forbidden fruit turned out – (Genesis 3), we need to have a clear understanding of what “…in the image of God…”(Genesis 1:27) truly means.

If we look in the Strong’s Concordance, we see the Hebrew word for image is “tselem”2, which also means likeness. This word derived from the word “tzel,” that means “shadow” or “reflection.”3. So we can discern from this, that the word “tselem” does not imply that we are “exact” copies of God, therefore; making us also a god.  Another way to state this point is to say we can see God’s reflection in us, much like we can see our reflection in our children.

Simple, God is Holy and divine and has absolute control of His faculty, to the point of perfection (Exodus 34:6-7, Numbers 14:18, Jonah 4:2), we don’t.  A good analogy that displays God’s reflection in us (the imperfect man or woman), would be a comparison between us and a 5 year old child.  Granted we share the same emotions, but there is a difference, in maturity.  If we are a good man or woman and the child grows up “striving” to be like us, they should become a good adult; but if they go the opposite direction in life they may not be like us.  Nonetheless, they will still reflect human emotions; but it’s of course a matter of choice.

The lesson here is that God wants us to mature in the right direction, His direction.  As we see when God counseled Cain on his anger.  God said “…if you do not do what is right, sin is crouching at your door; it desires to have you, but you must rule over it.” (Genesis 4:7). We are to rule over our behavior so we can shine “the Image of God” rather than the image of sin that may (or) is crouching at our door.  This is why He has given us His scriptures.  It’s His way of giving us His expectations, much like how we train our children.

We are the image of God, in the same way our image is reflected by a mirror or shadowed by the afternoon sun.  That being said, we are certainly not a carbon copy of God, thus no, we are not a god.  Yes, He has given us the tools for success; but without Him we will not be successful.  It takes a blueprint, a master plan, His written word. Those that do not follow God, are following their own rules. They are placing themselves on a dangerous path that can lead them to being their own god. For those that peruse His truths, Jeremiah 29:11 sums it up nicely by saying “For I know the plans I have for you,” declares the Lord, “plans to prosper you and not to harm you, plans to give you hope and a future.”

(1) By Marilyn Adamson, Connecting with the Divine, The major world religions and their beliefs about God. Hinduism, Buddhism, Islam, Christianity, and New Age…, startingwithGod.com

4 thoughts on “The Image of God”