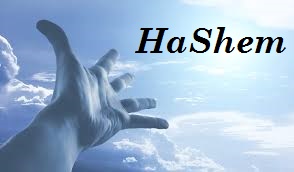 Talking to a good friend, we became curious of the names used in referring to God.  Interestingly, we found that HaShem is used in scripture; but never refers to God.  This constituted a deeper study.  The question becomes “why is this word used for God’s name and what does it actually mean?”

In I Chronicles 11:34, Hashem’s name is mentioned for the first (and only) time, 400 years after the exodus. In 1 Chronicles 11, it talks about the warriors that helped King David seize control of Jerusalem.  Of these 30 mighty warriors, some were the sons of “Hashem” the Gizzonite. Clearly though, this is not a reference to “Hashem” the Maker of the whole wide world. None the less, from this study of HaShem’s name in scripture, we don’t see any real connection to our Maker.  This begs the question, why is it used as a synonym for God’s name then?

The answer is found in Jewish tradition, where the name Hashem actually means “The Name”2.  As we know we are never to take God’s name in vain (Exodus 20:7, Leviticus 19:12, Deuteronomy 5:11), or our infraction will be meet with extreme circumstances (Leviticus 24:10-16, Deuteronomy 28:58-61). I suppose it’s a precaution to refer to God as “the name” instead of YHVH.  This helps to not run the risk of misusing God’s actually name in vain.

It is good that we place controls in place to not violate the Commandments.  God is also referred to in the Tanakh by seven different names (YHVH, El, Elohim, Elohai, El Shaddai, Tzevaot/Tza’ot and Yah)3. Some use Adonai; which is the plural for Lord, and in the Tanakh this name is only used in referring to God.  Also we see God being referred by His attributes like “Merciful”, “Gracious” and “Faithful”.  Sometimes He is referred to by His accomplishments such as “maker of heaven and earth” (Genesis 14:19, 22) or “Creator” (Isaiah 40:28, 43:15, Ecclesiastes 12:1).  If we are trying to be cautious, and we don’t want to use God’s name in a way that we’re not supposed to, why not use one of the more positive connotations mentioned above?

As with many of you, since leaving Christianity and moving to a more Tanakh (Old Testament) centric life. We have changed many of our ways.  Of the many things I have changed is my language, such as adopting words like Adonai and HaShem when referring to the Creator.  I have adopted most of my new attitude because I have researched things out in the effort of establishing grounded and sincerer mannerisms.  Regrettably, I have found myself, in cases, unintentionally assimilating.  This is in the form of adopting traditions over the Word of Adonai.  There is much harm in following a religion without asking the “whys”.  We need to measure everything.