Skip to content
HomeQuestioning the Credibility of the New Testament. 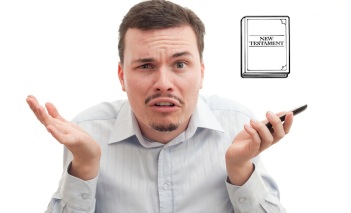 When I was a Christian, I made certain assumptions about the New Testament.  Firstly, that it’s books were written by the Apostles as the events happened.  Secondly, that the 27 books were accepted by the Christian Community after they were penned. Understandably, if anyone in church gave the actual history, other questions would have arised and the book’s credibility would have been challenged.  Of course, this would have led to compromising the integrity of Christian theology.  So, to quote Christianity, “For we are taking pains to do what is right, not only in the eyes of the Lord but also in the eyes of man” (2 Corinthians 8:21), thus said, let’s put all the cards on the table and allow the truth to speak.

For starters, the four gospels Matthew, Mark, Luke and John were not written by their namesake 1. Point and case is, Justin Martyr, a second century Christian apologist, who quoted verses from each of the gospels.  He, however, never referred to any the gospels by their given names. Instead, he referred to them as the ‘Memoires of the Apostles’ 2 . The reason for this is that the original gospels were not named.  So why were they give the names Matthew, Mark, Luke and John?  Well, around the second century, the church felt the need to give them Apostle authority.  What better way of endorsing a gospel then giving it an Apostle’s name. Obviously, Luke was not an Apostle, but Luke being Paul’s traveling companion gave instant credibility to the book of Luke by using his name.

Compounding the situation was that there were more than 27 Christian books.  Actually, sources say there were from 79 4 to over 200 1 Christian writings and over 50 gospels (see listing below).  So why are these books not part of the New Testament?  It is simple, many of these books contradicted one another.  Likewise, with early Christianity, there was much end fighting between different theologies.  This caused the church to accept only certain books which supported their theology  This was known as canonization.  However, this would not take place until 393 CE or over three centuries after Christianity was born. Giving Christianity 300 years to form before committing to a written doctrine challenges it’s purity from its original foundation.  Likewise, this gives cause for concern about the authenticity of the New Testament books.

To validate the New Testament, we use the Tanakh (Old Testament).  I am pretty sure that’s why Christianity glues it to the first half of their bible.  In His written word, God does give authorizations for added books beyond His Torah (Genesis, Exodus, Leviticus, Numbers and Deuteronomy).  This is found in Deuteronomy 18:15 – 22.  Here, God says that he will provide Prophets , and He did.  This is where we have the books of the Prophets, which combined with the Torah, helps to make up the Tanakh (or Christian Old Testament). If you study these 8 verses you will find one needs to be a proven Prophet and an Israelite for the authority to write God’s written Word.   God also warns in these passages about wrongful teachings.  So, at the end of the day, if somebody insists that the the New Testament books were written by Apostles and friends of Apostles.  You need to remind them that these were not Prophets, making their credibility void.

List of all Gospels:(Waite, Charles B. History of the Christian religion, to the year two hundred. Chicago: C.V. Waite & Co., 1884. Print. )

Fragments of possibly unknown or lost (or existing) gospels