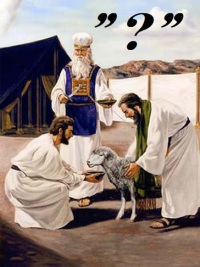 Contrary to popular belief, the Tabernacle and later the Temple sacrifice systems were not designed to forgive intentional sin.  Actually, the majority of the sacrifices would have been for those same things that we prayer for i.e. praising God, to become closer to Him, to express thanks to God, love or gratitude and celebrating the holidays and festivals 1.

Nonetheless, in this sacrifice system there were two areas that did deal will sin, the one was unintentional sin the other was the guilt sacrifice. Now unintentional sin didn’t mean a regrettable sin.  The Hebrew word used was “shegagah” and can mean error or mistake. So, the sin was literally a mistake.  If we looked at this in a modern-day analogy it would be the equivalency of you eating an unknown dish at a potluck just to find out later it had pork.  Another example would be if you cut the grass one morning only for your wife to remind you it is the Sabbath – “Oy Vey!”.  Conversely, unintentional sin is not when you cuss out a parent and blame it on losing your temper or any sin you just simply regret.

As for the other sin sacrifice, which is a “Guilt Offering”, this would be for crimes dealing with monetary theft.  The culprit would pay back the financial worth plus 20% and then make a guilt sacrifice (Leviticus 7:2).  This could be considered a sin offering, but only for some sins.  We need to remember that restitution for sins involving tangible theft are correctable, whereas most sins cannot be corrected, i.e. the debt can be paid back with the offender being penalized (20%). Conversely, if someone kills, betrays God or commits adultery there is no materialistic way to erase the crime.  In truth, by replacing something stolen and paying a penalty one has performed the final step of Teshuvah (repentance), which is restitution 2.  Sadly, most other intentional sins cannot be as easily resolved.

So, what about the other intentional sins?  For this there was no benefit of an animal sacrifice, the sinner would be cut off from the community.  As an example, here are a list of sins from the Torah that would have someone cut off:

Our first example is in Numbers 12, where we see Miriam gossiping about Moses’ wife, “the Cushite woman”. Not only is this in violation of Leviticus 19:16, but it infuriates God. Consequently, God gives Miriam leprosy thus making her unclean which causes her to be separated or cut off from her peeps. As we read, she did appear sincerely remorseful of her sin.  After serving the seven days in quarantine she was allowed to return to her people.  Then we have Korah, who about a year after Miriam’s momentary exile, led a rebellion against Moses for the Priesthood (Numbers 16).  For these actions Korah and his 250 were cut off, but not as nicely as the one week “time-out” that Miriam got. The ground literally open up and swallowed Korah and his posse.  So why such a difference in consequences?  It could be that Miriam’s sin was against humanity (against another human) whereas Korah and his followers sin was directly against God (It was God who established Aaron as the high priest –  Exodus 28:1).  Although some might say that all sins are equal, they are not.  The proof of this is illustrated in the Torah several times.  For example, saving lives (preservation of the 6th Commandment – Exodus 20:13) trump’s lying (violation of the 9th commandment – Exodus 20:16). Abraham lied to save his own life twice (Genesis 12:11-13, 20:11) and Isaac once (Genesis 27:7), even at one point Hebrew midwives were rewarded by God for lying to Pharaoh because they were saving the lives of Hebrew babies (Exodus 1:15-21).

Additionally, Miriam and Aaron appear regrettable about her sin possibly performing Teshuvah/Repentance.  Whereas Korah and his minion seem very indignant towards Moses who actually gives them opportunities to recant. So, it also appears to be the earnestness in repenting that allows someone to return.  This method of returning after being cut off is is further amplified by the Prophets:

Isaiah 1:27 Tziyon will be redeemed by justice; and those in her who repent, by righteousness.

Jeremiah 31:18 Yes, I turned away; but later I repented. When I had been made to understand, I struck my thigh in shame and remorse, bearing the weight of the disgrace acquired when I was young.’

Ezekiel 18:21 “However, if the wicked person repents of all the sins he committed, keeps my laws and does what is lawful and right; then he will certainly live, he will not die.

Many are wrapped around the axle believing sin was absolved through animal sacrifice.  In fact, the entire Christian religion is based on this.  Their messiah took on the words sins in place of animal sacrifices by offering himself (John 1:29, Romans 3:25, 8:3, Hebrews 9:14-22, 1 Peter 1:18-21).  Sadly, if this were true, their messiah would have died for “unintentional” sins. This would equate to a crucifixion just because I mistakenly ate a sticky bun during the week of unleavened bread. Again, to crystallize our point, just look towards Nineveh.  In Jonah 3 Nineveh is saved not through sacrifices but repentance.  This was about 760 BCE at a time Temple sacrifices were being performed and seven centuries before Christianity.